Review of the Claudio Caldini Films shown in the Argentine Film Festival.

The Argentine Film Festival that was happening in SAA Auditorium screened around eight short movies by the Argentine director Cludio Caldini in the fifty minutes time. The short movies that were shown in the fifty minutes slot were a rare and new experience for me. I had never ever thought of the idea of using space and the movement of objects in such a fashion. These movies in such a short duration made the senses aware and conscious about the protean possibilities of dimensions in which cinema can make its development and also leaving behind the set norms and narrative structures in them.

The inaugural film in this section was Aspiraciones(1976). Like most of the short movies by him this movie also contains certain peculiar characteristics of narrating the motion of bodies in an infinite dimension. The movie opens with a slow movement of burning candles towards an infinite end. After some time the movement of the burning candles begins occupying almost all possible dimensions of the framed space but ending towards the same infinite darkness. This specific scene reminds me of the central character from the movie 8 1\2 by Federico Fellini. The character in the movie is constantly searching for inspiration to direct a movie amid the gloomy crowd of the surrounding. If we see ourselves in such a way as Caldini observes these eternal movements we will arrive at a conclusion that our movement in this time space scale always leads us to an infinite realm. 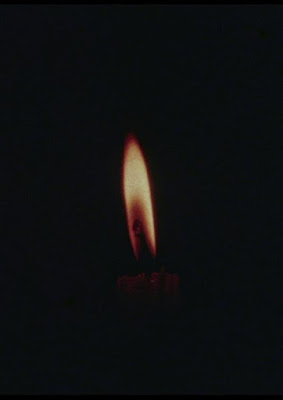 Another short movie in this series was Film Gaudi(1975) which shows us a sculpture of a chameleon and the camera zooms in on an ant which fuses into a constant zoom ins of several patterns on marble. This made me think of the incessant trajectories of thoughts in the mind. I was overwhelmed by the idea of exploring the park space in the movie without letting any human figure intervene into the frame. The movie uses stop-motion techniques to appropriately depict the unexplored space of the park along with the objects. The way of filming brings forth a very nuanced idea to get over the conventional method of storytelling through the representation of character(human beings) and stories associated with them. It is my personal opinion that the director would have used some arbitrary meanings from the relation of object and space domain.

Afterwards this series was extended by the short movie Ofrenda(1978) which showed a vast expense of Daisies in a field. The background music used in the movie was so soothing and calm that I felt as though I were in a Buddhist monastery where I was going to be relieved of all my inner conflicts. No other thought entered in my mind other than enlivening and enriching the inner perspectives of life while the visual and the audio became a complete harmony in their progress. Caldini surely is concerned here in this movie about the uniformity of movements along with the stable development of the flowers as a perspective. Afterwards I meditated over Caldini’s views where he explains the frame by frame photographs of the full bloom of Daisies as a culminating cycle of life. Later on I felt an extension to his thought by adding this opinion of mine that everything that his movies are showing are in some way or the other are trying to portray Heidegger’s ideas of time and space along with all the possible developments that happen in that domain.

The next short movie in the series was Ventana(1975) which opened with single white line passing from right side of the screen to the left hand side of the screen. This movement of white lines continues to move but as the movie progresses the number of lines and the direction of their emergence increases. Their movements become chaotic and organized at the same time. It is quite an irony here to observe the development of movement with the changing of colors of the moving light along with the directions. They seem to be exploring every possible domain of perspective with the passing of these lights from every possible directions. I was confused for some time but clear thoughts of mine started developing by the end of the movie where these passing light paths give way to the frontal view of approaching waves through open window. It suggested the possibility of the clarity of thought hidden amid the chaotic and puzzling web of thoughts. This film was different than the above mentioned movies as it had a definite element in it. This definite element for me was the shot which depicted window facing the approaching sea wave.

The next movie screened in the series was Baltazar(1975). It is the first short movie in the series that captured human activity along with its presence in the frame. Baltazar is an eight shots movie which in my opinion is symbolically representing the child playing and falling on the beach as the human beings prone to being a subject of different perspective created by camera. In this phase we are more vulnerable to someone or something else’s eyes upon us.The camera is observing the child as if the presence of camera is omnipotent. Caldini seems to be concerned about the magical power of the micro moments that define us. The shot -where the waves are continuously washing the bottle ashore and do not let the bottle stay in a space - is the portrayal of human dilemma along with unconscious efforts to get out of it. An almost poetic approach is provided with an agency to get hold on the narrative in two ways. The first one is the self engrossed activity and perspective of the child and the second one is the eye of the camera that is capturing the human perspective in relation to the space, time and the specific activities.

The next short movie screened in the section was Vadi Samvadi(1981). I t is a movie that was directed much later by Caldini and shows his homage to the Ragas of Indian music. The very establishing shot along with the Indian classical music suggests that the director is trying to understand the nuances of harmony among human beings, nature and the machine. The musical amalgamation and elaboration of the moving images along with the repetitive and blurred zoom ins of leaves, rosebuds, a person sitting on the chair, a letter and the notebook are representation of the harmony that Indian music serves as one of its greatest purposes. One may find it more soothing and relaxing because of the selection of subject and the style of presentation. The shot in which the small and rotating wheel of the machine on the table is portrayed is really very beautiful and one of the rarest shots in cinema to be seen.

The very establishing shot of the last movie Un enano en el jardín(1981) of the series reminded me of the last shot used in the movie Irreversible(2002) by Gasper Noe. This very movie is also an extension of the core idea of the director about time, space and the activities. Which is a close observation of the bodies in circular motion and how it gets disfigured while registering the motion through camera. I really loved the film festival. It provided me with the opportunity to watch such a rare piece of cinema. I also knew the completely new way of storytelling through cinema. I would recommend the movie lovers to attend such film festivals as it is a rarity and luxury to get such an opportunity to watch such experimental cinemas.