REVIVAL OF THE CULTURE AND IDENTITY OF ABORIGINAL PEOPLE

The Exhibition named "Indigenous Australia : Masterworks from the National Gallery of Australia " was held in the NGMA, New Delhi from 16th of June to 26th of August. The Exhibition was a result of the cultural collaboration between Australian High Commission, India's Cultural Secretary, NGMA Director General and NGA Deputy Director.

The artworks that were on public display in the exhibition were created by the continent's aboriginal artists from past centuries to the contemporary time. The exhibition was equipped with the works by the pioneers like 'Tommy mcRae, Jean Baptiste Apuatimi, Tim Leura Tjapaltjarri' to the contemporary and emerging australian artists like 'Tony Albert, Vernon Ah Kee'. A total of more than 100 art works were there in the exhibition. Interesting enough that these artworks were in form of bark painting, carvings on wood, weavings, string art, prints, photographs in different colour contrasts and several new art styles. The time line in which these artworks were produced were from the late 18th century to present day. The first artwork that falls while entering the main door of the exhibition is quite a significant text based work named 'Austracism' by the young artist Vernon Ah Kee. It is fairly large panel within which black and white Helvetica Font is used in a visually engaging and evoking way for the viewer. I personally was moved by the direct and stunning way to depict the racial tention and traumas that it was revealing through the letters inscribed. It led to rethink of the main purpose of the exhibition and I said to myself that it is very impactful for the visitors as they directly read the indigeneous perspective upon the racial discrimination done by the colonisers.I felt it impactful also because of the reason that the visitors don't have to watch an image and decode the encrypted meaning in it. This text based work was clear in what it wanted to narrate to the visitors. Below is the image of the art work that interested me a lot. 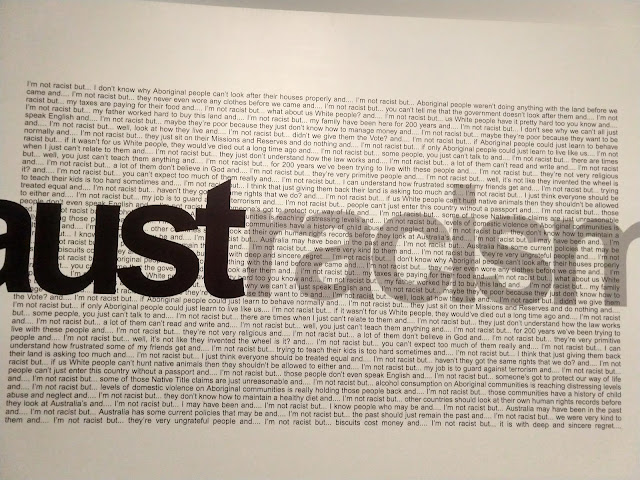 Moving further inside the gallery, more visual evidences are exhibited that make the visitor to inquire more about the cultural diversity that the aboriginal people had in their society. It also closely reveals the rich cultural heritage, artistic knowledge, several mythological stories and their values that their ancestors had preserved and nurtured all through their life. Another equally gripping image was 'ASH on me' by the emerging artist Tony Albert. It made me so curious that I had to go through such a detailed work and observe each and every sculptures that were arranged upon the word 'ASH'. I figured out that these small sculptures were ash trays with several essential elements printed inside the surface of these ash trays. These cultural elements were figures of aboriginal male, female, child, kangaroo, crocodiles, map of the island continent, working laborers. This particular work shows the whole of the historical and present day issues of aboriginal identity, representation and their stand in the past and modern day. Such issues and concerns are repeated and boldly revealed through various other art styles. 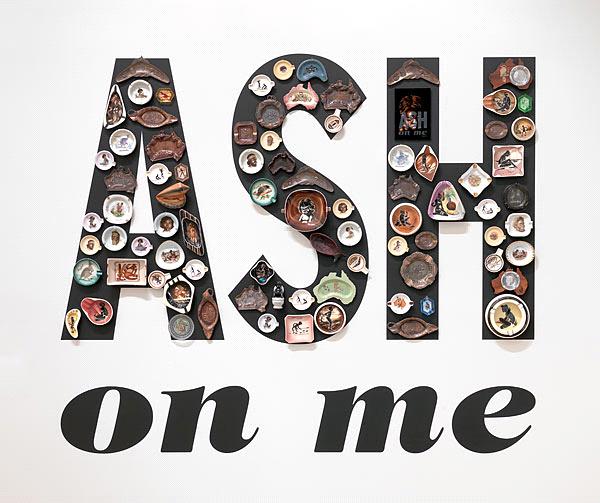 Furthermore another art work ' Hunting Party' by the western aboriginal artist Christopher Pease also evokes such inquiry but with different narrative elements. This painting was completed in 2003 and it is oil on canvas medium. What stuck me on seeing the painting was that how cruel and inhuman the white men were. They did not really care about the nature and culture of the aboriginal people. They did not want to understand how connected these people were to their land. Pease selects most of his works from the historical documents and photographs of som 19th and 20th century Irish immigrants. In the image, he has dwarfed the white men compared to the black snake whom they are trying to kill. My opinion is that he wants to tell that these colonisers can have lots of power and technology but they can never win the soul and spirit of these gigantic animals. It was in their culture that they used to appease the animal spirit before they trapped them. This painting arises the question that why can not told the white men understand the integrity and worth of these aboriginal people and what was it that made them feel superior to the indigenous people? 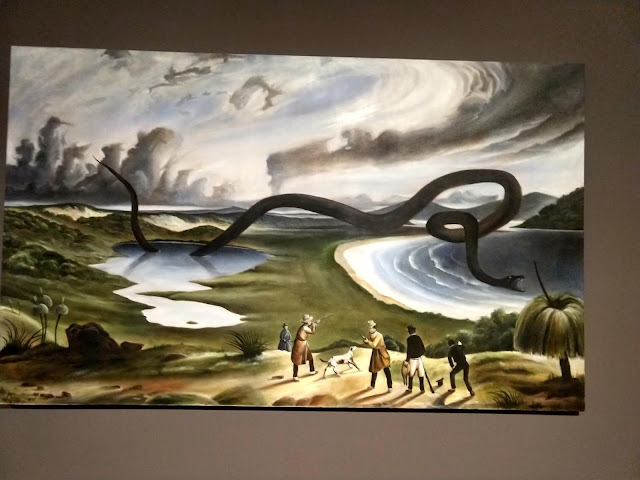 One completly different art work attracted me while I had seen almost half of the works in the Gallery. It was named 'Cultivation of Whiteness' by Yhonnie Scarce. The material used are blown glass and commercial glass. There are sixty glass samples stacked properly on the wooden shelf. These sixty glass samples are symbolically representing the Aboriginal people being used as a specimen for refining them into whiteness. It was quite shocking and revealing to know that how much did they(Aboriginal people) tolerate because of the mental sickness of the White men. She has chosen the glass material that is very delicate and brittle in its properties. These properties depict the delicate nature of their(Aboriginal people) bodies while the Whites were making experiments upon them. 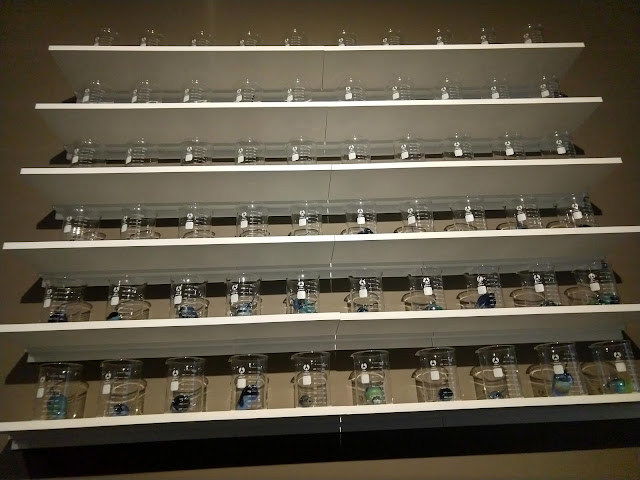 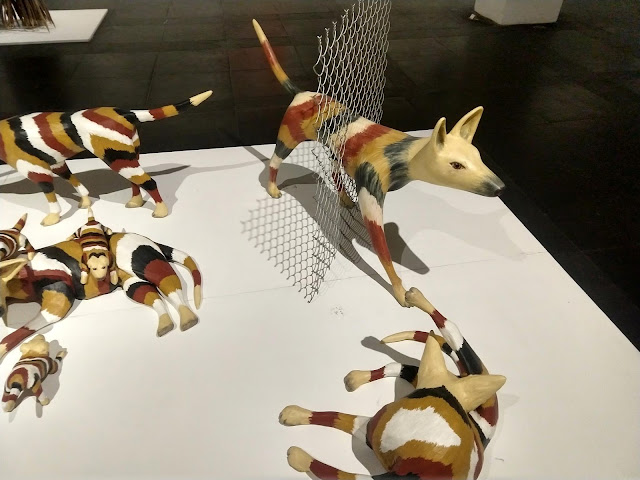 Aboriginal dogs in a family 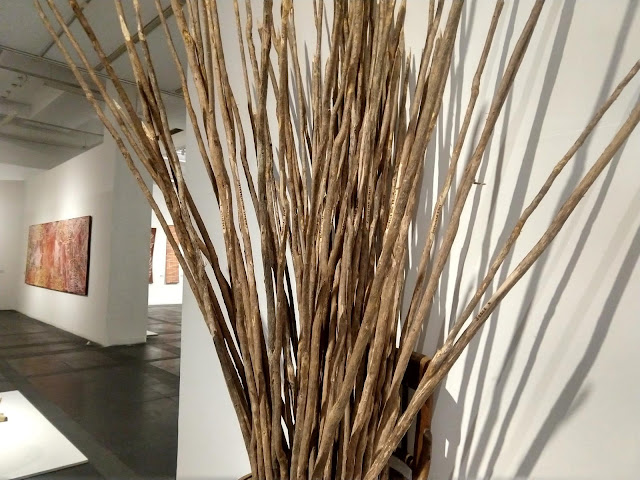 By the end of my visit I had grasped very much from the exhibition and learnt the almost unknown history of the Aboriginal people to me. It was successful in arising lots of questions about the still existing exploitative nature of some communities over others. I also reasoned myself that to what extent does it help someone or some group to say that they are superior to others without knowing the fact that things and beings in this world are meant to exist in harmonious co-existance rather than the segregating and marginalizing ways. I strongly reccomend everyone to visit the exhibition if it happens next time.