Encoded meanings in the images of ‘Buddhas’ through the employment of complex and consistent systems of Tāntric iconography .

The iconography of Tantric tradition is filled with polymorphic symbolic forms. In the context here ‘Polymorphic symbolic forms’ denote to the internal capacity of the practice to make use of several different forms that have already existed in the earlier tradition of Buddhism in order to build the internal structure of the complicated system. The Tantras consist of texts both Hindu and Buddhist which contain the teachings that are expressed and derived from their art and symbols. Vajrayana, Tantrayana, Tantric Buddhism, Esoteric Buddhism are terms referring to the various Buddhist traditions of Tantra. Vajrayana is a complete literature of Buddhist Tantra. Vajrayana according to the Vajrayana scriptures refer to one of the three vehicles or routes of enlightenment. The three primary sections are as follows- early Nikaya(Hinyana), “Individual” or “Lesser Vehicle” Buddhism; later Mahayana, or “Greater Vehicle” Buddhism; and cultic Vajrayana (Tantric), or “Diamond Vehicle” Buddhism. Vajrayana is also known as ‘Diamond vehicle’ or ‘Thunderbolt vehicle’ which refers to vajra, a mythical instrument for ritual use. Early Nikaya Buddhism focuses on the enlightenment goals of individual practitioners and later Mahayana Buddhism introduces the ideal of the Bodhisattva, one who seeks enlightenment over the course of lifetime in order to benefit all the beings that can feel or experience or has life within. Vajrayana practitioners, a tantric yogi or yogini, acquires the bodhisattva vow yet hopes to achieve enlightenment through direct or immediate knowledge of non duality in a single lifetime by following a greatly accelerated, highly esoteric, and dangerous path. Vajrayana tradition of Buddhist Tantra practice has iconography that is complex but consistent in pattern. The tradition makes use of mudra, mandala, mantra and Kalacakra. The text itself addresses almost all possible domain of study and practice in life. These domains includes history, astrology, psychology, cosmology, philosophy, sexuality, alchemy……..to name a few.

Several tantric cults started flourishing in parts of India, Tibet, south-asian countries and Japan. Among these tantric cults, Kalacakra was the most popular. It is also translated as the ‘cyclical path of time’. This system is concerned with the homology between macrocosm and microcosm. It brings fulfilment to tantric practitioners. The Indian philosopher Nagarjuna captures the union of conventional and ultimate in his statement, “There is no distinction at all of samsara from nirvana. There is no distinction at all of nirvana from samsara” (Thurman 1984, 159). The Kalacakra system reflects that macrocosm and microcosm are not only symmetrical to one another, they are one another. This medieval system exhibits the understanding that was there in the text towards the oneness and harmonic union of the two.

The whole realization has a philosophical and experimental tone. Following the popularity of the medieval Sri Kalacakra, a rich ritual tradition developed around this textual cult, culminating today in pageants referred to as “Kalacakra Empowerment.”These spectacles are conferred by fourteenth Dalai Lama and other high-ranking Tibetan religious leaders worldwide…………….The “higher empowerment's” necessary for “completion stage” yogas are considered too esoteric to be granted during large public gatherings (Sopa 1985, 94-95). These present day ritual festivals certainly are not completely in tune with the original Sri Kalacakra writings and practises. It is a serious damage done to the medieval textual descriptions of the ritual found in the Sri Kalacakra.

The application of Iconography in Buddhist tantra is a way to encode several meanings and practical agendas relating to yogic practice. That is the reason why Iconography becomes the doctrine of Buddhism expressed visually or it may be seen as an expression or technique that gives an accessibility of Liberation by sight. It becomes an aid to the attainment of enlightenment, a vehicle or a ‘diamond vehicle’ -as is Vajrayana known- that functions in a way to create an engagement of certain purposed ideas and meanings in the encoded form. The communication becomes quite difficult because of the encoded and cryptic nature of meaning and only a limited message is possible to be communicated. For Buddhists the most important thing about an icon is its religious meaning. These iconographic works become so complex and confusing that one should first know either the meaning of each iconographic representation in the same frame or should know the context behind the placing of each icons in the frame. The complex and consistent iconographic system itself makes one question several aspects of the image and these aspects would be like this;

1.What was the condition for which these images were designed?

2. The effect that was hoped to be created from the image.

3. Spatial factors like was the image to be seen in dark room with little flickering light or in a completely naturally lit space.

5. Was the image meant to be seen as an individually complete iconographic presentation or should it be seen as a part of long row of similar figures.

6. Does the plain or painted background become a part of the complex iconographic tradition of Buddhist Tantra. These aspects in the form of speculation show the manner in which tantric iconography employs the complex and consistent system in the images.

Number of iconographic representations of the basic macroscopic/ microscopic homo-logy, or melothesia, exist in the Kalacakra system, where the primary one is sand mandala and the yab-yum (father-mother) consort couple.

The idea of iconographic interplay works with the idea of mudra in the tradition. An elaborate assortment that require a precise positioning and interlocking of fingers together with the placement of the hands at various points on the body. The Vajrasattva’s mudra is done with both hands into fists and places them on top of the right and left thighs.

Following are the mudras that are used in the iconographic depiction of several Buddhas in images.

• Aksobhya’s mudra- One assumes the cross-legged posture, puts the upward palm of the left hand on the lap, and places the right hand on the side of the right knee until the fingers touch the ground.

• Padmapani’s mudra- One assumes the cross-legged posture, puts the fingers of the right hand on top of the left hand, and turns the right hand upward and level.

• Amitabha’s mudra is described as one of “concentration” which is known as ‘samadhi’ in sanskrit.

• Five-tipped vajra mudra- It is done by joining the palms of the hands and then fashioned into the shape of a lotus petal.

• Skull mudra- The fingers of the hands are placed together and the hand is placed on the auspicious skull, a lotus petal sits above, and the hand is extended to the back.

• Bow mudra- The fist and left forearm are extended and the right hand reaches toward the back.

• Vajra-noose mudra- The joint of the middle finger is placed above the left fist, the forefinger is lifted up and drawn forward, and a cavity is formed in the center of both the middle and forefingers.

• In the mudra of the small drum, the middle finger form a fist, the forefinger is joined on top of the tip of the thumb like an iron prod, and the half pinky is raised.

Jensine Andresen in the article Vajrayana Art and Iconography writes that Kalacakra mudra practice requires tantric practitioners to identify with divine images. One first ‘binds’ the mudras of the six Buddha families, and, having assumed the divine mudra relating to the seed syllables, one later identifies with Kalacakra himself by performing mudra modelled after each of his ritual implements. In all of these cases, conscious network is willfully reentrained to resemble the ritually prescribed representation of divine conscious network. These mudras, mantras and mandalas become the central theme that is consistently depicted in the complex iconographic depiction of Several Buddhas.

Beings of the world of change are shown as stylized portraits which emphasize their realization of their own Buddha nature by giving them the same feeling of tranquility. Protective deities are shown riding, dancing or standing in wrathful forms actively defending the doctrine and destroying ignorance. 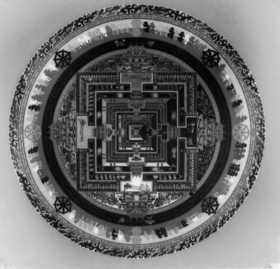 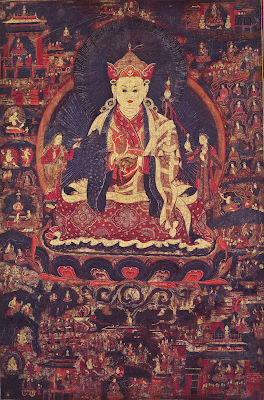 The Buddha Amitabha heads the lotus family of the West. Iconographically, colour red, the element fire, and the extinction of lust and greed is associated with this family. The Bodhisattva Avalokitesvara (Lord of the Merciful Gaze)- from whom proceeds the goddess Tara (The star or Saviourness) – emanates from the Buddha Amitabha, has the protective deity known as Hayagriva. This is the best known and most popular of the families. In addition every Buddha can be seen as operating on three levels or as Buddhists put it, having three bodies, the body of religion (dharmakaya) the body of bliss (sambhogakaya) and the body of change (nirmanakaya).

Coming to the conclusion, I feel that the whole system of tantra is a colossal domain of study that needs proper research so that we can know every subtle technique that is used in the iconographic descriptions of the whole philosophy of Tantra, its practitioners and the cosmic homology of macrocosm and microcosm. The very nature of adhesiveness towards all possible beings is itself a complex and layered system of tantra that still requires proper understanding and visualisation.

2. Thurman, Robert A. F. 1984. “Tsong Khapa’s speech of Gold in the essence of True Eloquence: Reason and Enlightenment in the central philosophy of Tibet. Princeton, N. J.: Princeton Univ. Press.