Gradient Descent; A step towards a newer realm

Curated by the brother duo Kartik Kalyanraman and highly acclaimed artist Raghava KK, the exhibition “Gradient Descent” is the first of its kind as it collaborates with six artists who explore the relationship between man and machine, AI (artificial intelligence) and the role of the artist. “Gradient Descent” is a machine learning algorithm that is used to optimize the output and find the best possible solution for a certain problem. Following Marxian thought that emphasizes that it is the change in the economic mode of production first, that causes ripple effects in society, one is reminded of the growing presence of technology that solves our day to day problems in our lives and how it has shaped the way we live. Art draws inspiration from its surroundings- it reflects and critiques and it too has adapted with times. The role of artificial intelligence in creating art has led to debates about the meaning of art. The curators narrowed down to six artists- Mario Klingemen, Harshit Agrawal, Tom white, Memo Akten, Anna Ridler, Jake Elwis and Nao Tokui who are not threatened by AI and Its power to replace the artist. Instead they believe the collaboration between ‘AI and I’ (I being the artist) will push art out of its stagnancy and lead to a more creative future. The gradients within the gallery space guides one to the first showcase by Mario Klingemen who is a pioneering artist in the field of AI. In this particular installation Klingemen fed the AI training set algorithm with images of old master pieces and an image of himself. Blending the new and the old, the AI surprises both Klingmen and other spectators with new images that are influenced by the masterpieces that look morphed and border lined grotesque. Features of Klingemen’s face are also spotted. 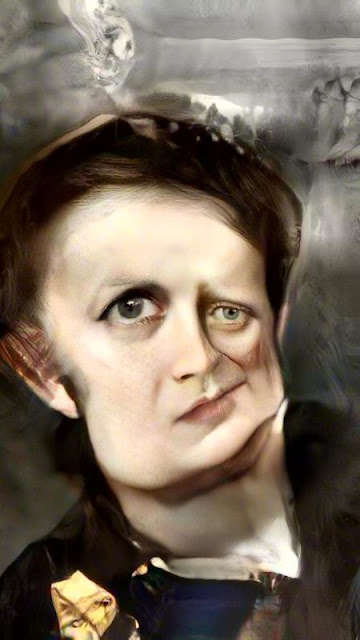 The installation titled “79530 Self-Portraits” makes one reflect on the human machine relationship and how the machine views the self. Klingemen gives full autonomy to AI to portray himself thus showing the oneness between the artist and AI. This conversation is carried on further in Harshit Agrawal’s work “The Anatomy Lesson of Dr. Algorithm”. Agrawal uses AI to create fresh images of human flesh revealing how reliant we humans are on technology to understand ourselves. It also addresses the fear of being replaced by AI and reassures the viewer that flesh is unique to humans and AI can’t snatch that away. Not yet. 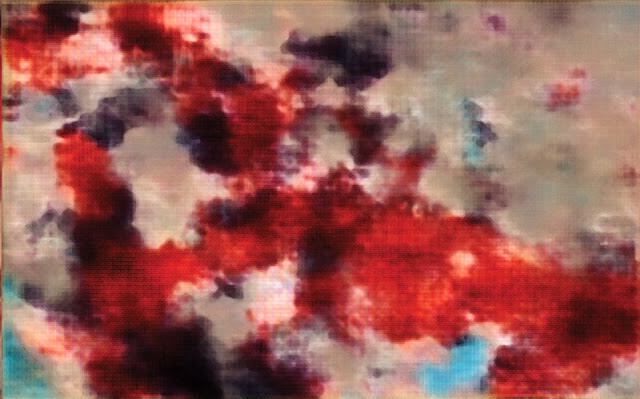 The highlight of the exhibition is Tom White’s work. It forces the viewer to engage with his works as it questions our rigid notions of perception. His first series called “Perception Engines” was created by taking pictures of objects off the internet and feeding it into the algorithm. The AI then recreated the images and made into an abstract work of art that looks nothing like the object it is supposed to describe. Perhaps it is time to redefine semiotics. White’s works are politically provocative. His other work titled “Synthetic Abstractions” is a commentary on society and its strict notions about obscenity and vulgarity. White uses the algorithm that dictates which images should be branded as explicit in content (in terms of nudity etc) and therefore shouldn’t be found on popular sites like amazon.com. It is fascinating to see how these abstract works of art are censored for nudity or racial insensitivity because of our paranoia, fear and quest to be politically correct all the time. 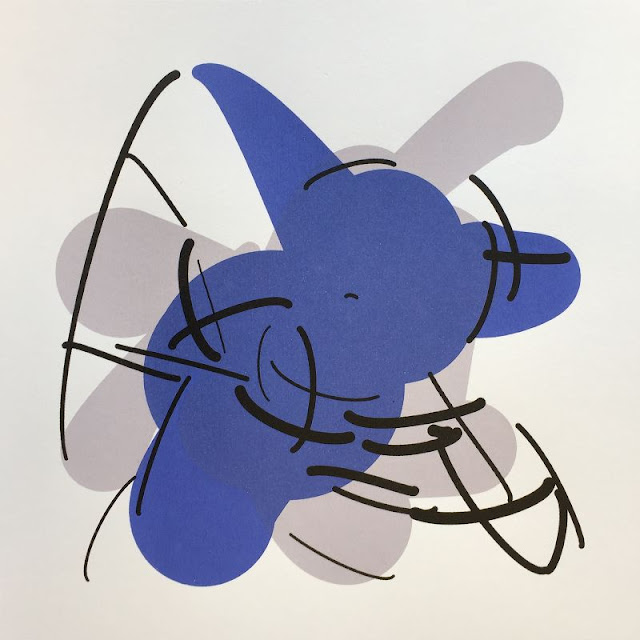 It is the machine that makes us review ourselves. This unsettling feeling is evoked in Akten’s work as well. Memo Akten uses AI to explore the interconnectedness between the individual, society and the universe. Using a four channeled video and sound inputs, the AI recreates the 20,000 images of universe, nature that it was exposed to, to connect the smallest things like an orange peel to the larger unknown aspects like the universe. The work is supposed to be a commentary on the binaries between science, religion, ethics, and technology but the viewer is unable to get a full essence of it because of the technical problems the gallery is facing. 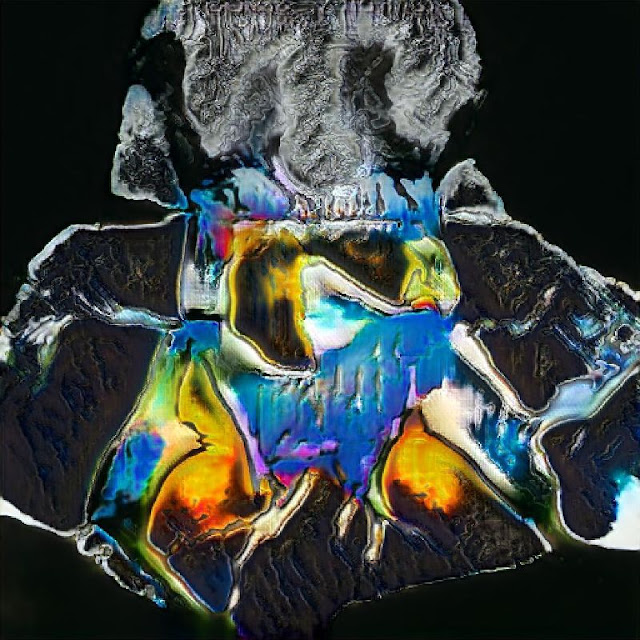 The same occurred with Nao Tokui’s installation where the music was supposed to be an important element but unfortunately it didn’t play because of these technical errors. Nearing the end of the exhibition is a silent video installation by Jake Elwis. Two videos play simultaneously on two separate walls- one with images and the other with dialogues. One is left in a chicken and egg situation as the viewer is unsure if the text dictates the image or vice versa.The three hundred minute video titled ‘Closed Loop’ allows one to eavesdrop on a playful nonsensical conversation taking place between two AI devices. According to the artist it resembles the amusing conversations people from different cultures have when they encounter each other. 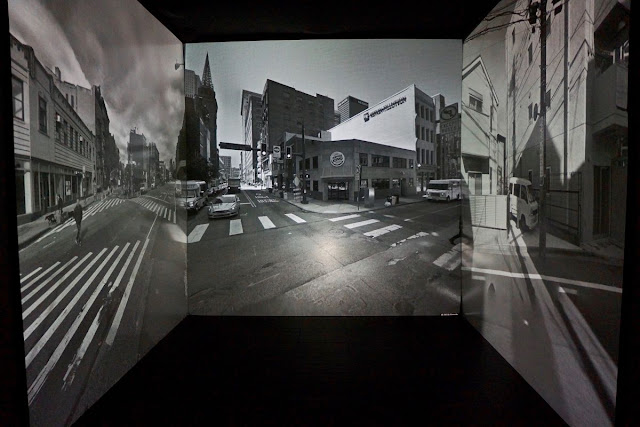 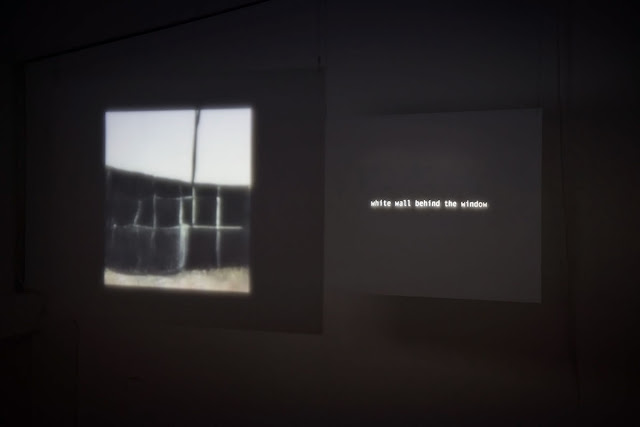 My personal favourite in the exhibition is Anna Ridler’s work as she uses AI as a medium to give meaning to something else. Unlike the others she doesn’t mock or tease AI in playful way and let the work be defined by that. Inspired by an Avante Garde film that was based on Edgar Allen Poe’s short story “Fall Of The House Of Usher”, Ridler pays homage to both the film and the story by recreating drawings of the first four minutes of the film. She later used these sketches to feed it into the AI system and the sketches were made into a film. 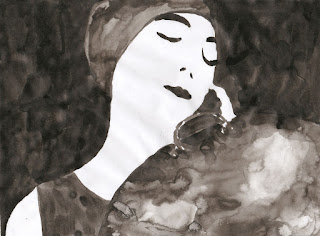 Anna Ridler, Untitled (From the first training set), from the series
''Fall of  the House of Usher''  26x21 cm

The story is metaphorical of the role of AI in art in many ways The dilapidated, spooky house crumbles to ashes when the newcomer leaves it, giving a sense of emptiness and relief. Similarly AI has the potential of destroying the art one is accustomed to but in doing so it rejuvenates art once again. The exhibition “Gradient Descent” questions the rigidity of today’s art and views the structured, codified AI as a source of exploring and engaging in creativity. Thus AI is not a threat but a mere collaborator of the 21st century artist. I see an immense possibility that will for sure be a contributor to carve the world in a profoundly beautiful and fascinating ways.
Labels: art artificial intelligence Exhibitions grotesque Science