The first image titled “Bharat Mata/Mother India” by M. F. Hussain contains a woman whose frontal nudity is shown. It is an oil on canvass medium. The woman is painted completely in red color. Her bodily outlines are drawn in such a manner that it creates a suggestive perspective of the geography of the Indian subcontinent. Indian subcontinent can be seen to have been exhibited in a personified form.

On the lower right corner, the shadow of a man in a meditative posture is drawn. From my point of view, it can be a reference point to the age-old tradition of Yoga and Meditation that have been nurtured by the Indian sages from ancient times.

Her left hand stretches to the north-eastern part of the country. Below her left arm a white colored round wheel is drawn. The round wheel with spokes inside symbolizes progress and eternal movement when it is a part of the Indian flag.

A boat is drawn in the lower left corner and this boat contains a mast colored in black, red and fading yellow. The boat in my opinion is the representative that India has had with other nations through water ways for the last hundreds of years.

The central part of the nude lady also becomes a symbolic representation of the modern India and the ever evolving norms and value systems that are needed. A visually beautiful view of the rising sun is depicted in the upper right corner. The warmth that the beautiful morning sun-rays will cast is an embodiment of the comfort that the Indian subcontinent needs.

Summing up the essence of the image, it feels that the artist wanted to portray the ever-changing Indian subcontinent along with an inclusion of the cultural and age-old themes of life. The nude woman may take a turn and that turn will be the changes that the subcontinent has to live through.

Another image titled “Bharat Mata” was painted by Abanindranath Tagore in the year 1905. The medium in which it was painted is watercolor. The image contains a lady who has four hands. All the hands carry some object which signify the symbolic representation of culture and religion. She is holding beads, white cloth, a book (maybe Veda) and some grass in each of the four hands. She is in saffron and red colored sari. It can be seen as a portrayal of the traditional and cultural dress that was very much preferred by the Indian community in the earlier time. 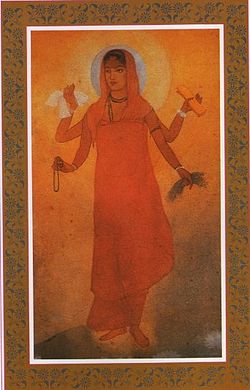 The four things that she has in her hands suggest the presence of the below mentioned themes inside the Indian subcontinent. The beads symbolize the religious element. We see many people with a rosary beads in their hands. They keep on counting them one by one. The white apron in her hand shows the presence of the eternally cultivated peace inside the country. The book (Veda) in her hand refers to the age-old knowledge and philosophy that had always been with the people of the land. It also tells us about the presence of the tradition of discussion and argument as a central activity for seeking truth and wisdom. The grass in her fourth hand is symbolic of the rich diversity of flora and fauna inside the territory.

Her Gaze is very confident of the object that she is looking at and this becomes much intense with the addition of the enlightening aura around her head. White colored lotus flowers are below her feet. It tells us of the presence of water all around her feet. It is because of the reason that this territory is the southern part of India and the Indian ocean is around her. The fully blossomed flowers tell us of the Indian prosperity in the aquatic regions as well.

The next image is titled “Bharat Mata” and was painted by D. Banerjee around the year 1930-40. It is in the medium of popular print media. This image has a woman -in fully ornamented costume and crown- as the central figure. She has four hands and each hand is holding something. The hand on the right side in the back is holding a book. The two hands in the frontal part are tied together. The fourth hand on the left is holding a “Trishul” which is used as a weapon and many mythological stories have the motif of Trishul for exhibiting the power of the persona. The hand has the tricolor flag which is getting hoisted from it. 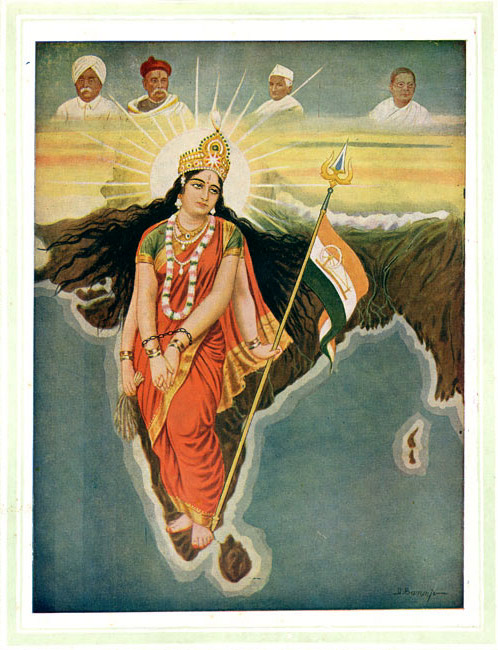 The ornamented and crowned woman is the only protagonist here. Her portrait occupies the geographical outlines of the present day Indian subcontinent along with some parts of present day Pakistan in the west and Bangladesh in the east. The painter certainly has covered the geography in the time frame of pre-independent India and becomes symbolic of the colonial territory of India. Pakistan and Bangladesh were parts of India then.

The upper section has four figures who were an integral part among the visionaries and freedom fighters who struggled and fought for the independence of India. They are Madan Mohan Malviya (Who had establishe B.H.U. in the year 1916) Bal Gangadhar Tilak, Maulana Azad and Pt. Chitranjan Das.

The time and year in which the painting was drawn suggests various meaningful stories behind the painting. The freedom fighters are placed there above the image of “Bharat Mata” to tell the viewers that they will set her free from the colonial power. She is draped /ornamented in dress that is in the tricolor (saffron, green and white). This representation refers to the unity and integrity that was needed from the parts of the sub-continent so that they could fight against the colonial rulers.

Her aura is glowing in a raving intensity and energy. One interesting thing to be observed is that the flag is not the present day tricolor with “Ashok chakra” in the center. The “Ashoka Chakra” with its 24 spokes represent the 24 hours of a day and its incessant movement and progress. The reason being that present day tricolor was not designed by the time the image had been painted by the artist.