Understanding "Culture Industry" of "Theodor Adorno" in the contemporary world


The amalgamation of "Culture Industry" in our everyday life. 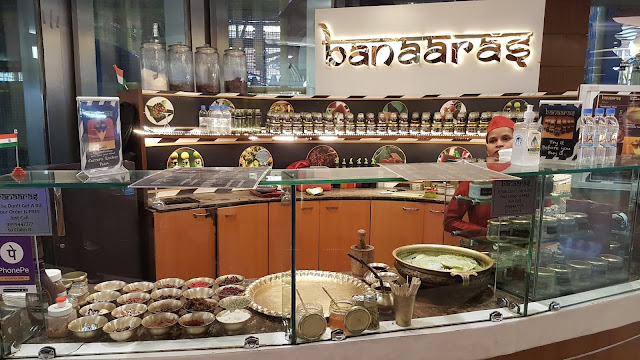 Title: Banarasi Paan inside a mall

Fig 1: An ordered and patterned arrangement inside a beetle shop in the Ambiance Mall represents the idea of a city called Banaaras. It uses its name as a fetish for luring the customers. This setup inside a mall shows the contemporality of the culture industry, and that it has become far too complicated today. Here, this shop by trying to bridge tradition with modernity is indicating that the city of Banaaras is also known for Beetle, and that the cliché khaike paan benaras waala is not merely a cliché but also a representation of the importance of beetles in the everyday life of the people of Benaras. This is how the appealing effect created by the shop develops the feeling of the essence of banarasi paan inside a mall in the national capital of India.

The small paan shops that are mostly found in any locality all over India is here not even the reference point for this fancy Paan shop. The accommodated area for the shop inside the mall can give the visual impression of a small restaurant. Does not this fairly larger space of the shop is to detach it from the idea of a paan shop outside the mall. Even having a paan from the shop here can desublimate the experience of the customers. 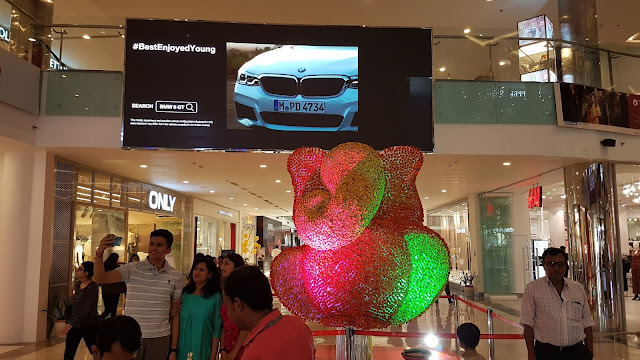 Title: Ganesha under the BMW advertisement

Fig 2: Whole inside and outside environment of the Ambiance Mall had turned itself into a ceremonial religious space reflecting the unholy nexus of neoliberalism with the religion of the contemporary India. This image of Lord Ganesha which was the center of attraction for many visitors to mall was also carrying the hidden persuasive intentions of the owner of the place. The location of the colorfully decorated Ganesha was amidst the digital hoardings of advertisements for several big companies. In the image it is very clearly visible that above the statue of Ganesha, a gigantic size digital advertising board is advertising the automobile manufacturer BMW from Germany, thus reducing the symbol of Ganesha into an auspicious moment for buying the commodities.

Ganesha here is certainly not for the purpose of religious engagement. It was the occasion of Diwali and the idol can create a feeling inside the visitors that whatsoever they will buy will be an auspicious one for them. 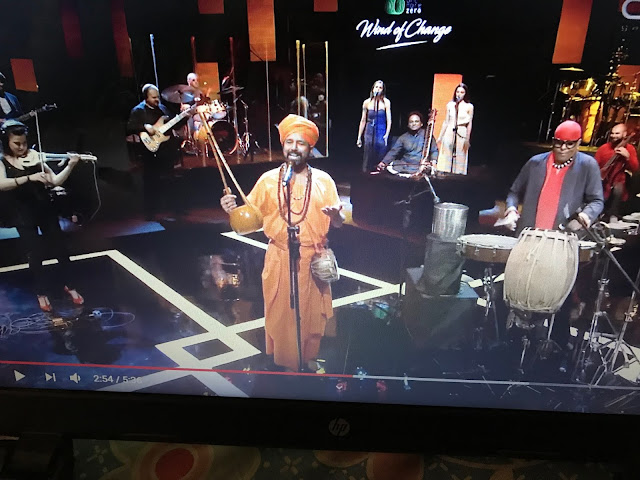 Fig 3: The front stage of a Baul performer in the environment created by the culture industry of Bangladesh.
Just like the CokeStudio, The Wind of Change in Bangladesh exemplifies the manner in which the contemporary culture industry of our society is operating in the world of hyper-reality. And YouTube now appears to be a medium that reflects the transformation in culture industry. The Baul song in a sophisticated setting of the studio has an infusion of all sorts of musical instruments, cameras, lights and recording artists. The program Wind of Change is a connector of all these elements and creates the illustrative display of culture industry. The essence of these performances in an open space which is independent of the industrial and technological approach is appropriated once it becomes a part of the technologically/mechanically controlled sound and already choreographed space. The Baul songs that these artists are performing are now a commodity of consumption by the larger audience. The recording, sound quality, clarity of the video, the targeted audience and the website that will be the decider of a final cut of the recorded video….all these things reduce a simple yet profound event into a commodity element. It gives a completely different experience when one watches the video of a Baul song performance on a YouTube channel than in an open natural space without any intervention of the industrial tools. As a consequence the art of this Baul performer is not lived anymore – it is only performed 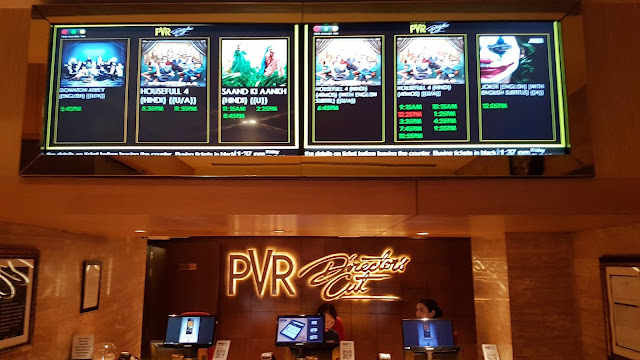 Title: Cinema in an atomized space

Fig 4: The picture above shows the turning point of the entertainment industry of our advanced industrial society. The image was clicked in the DLF Promenade. It is an outer booking desk of the posh theater which only shows the special Director’s cut and manifests the transformation that has taken place in the realm of theater over the period of time. It appears that the theater today has succumbed under the conditions of the market. The theatrical space seems to transmit a hierarchical consumption of visual art by making it exclusive only for those with a distinct taste of art. 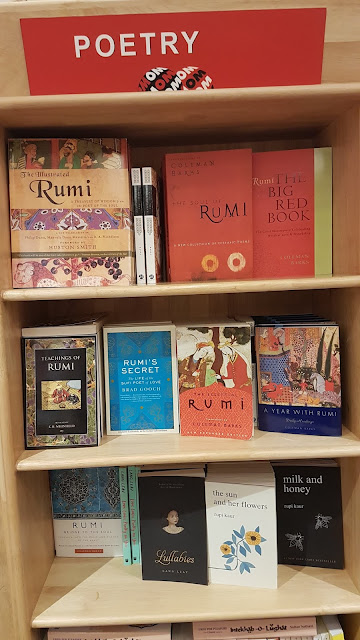 Title: Rumi on a book shelf

Fig 5: This book store in Connaught place was very alluring to me and I suppose that it was so because of the way the display case was arranged. In the image a poetry section is shown with some of the widely read books by some poets and writers of the world. We can see the poetry section has a major frontal display of the book covers of the poetry penned by Rumi. Yes, it is a well known fact that he is widely read in advanced economies such as USA and other European countries, However, for a developing economy such as India making a Sufi mystic attractive makes him sellable as well. This is perhaps one of the reasons why the books of Rumi contains such attractive covers. Most of the visitors to the shop were heard talking about the cover design of the books in the shelf. I could understand that why the publishing houses are concerned about the outer appearances of the books. The outer appearance of any book may be a big factor for many customers to buy the book as an appealing object.

Credit: The images were clicked by my friends Sagar Dey, Jitendra Kulasthe, and Praveen Kodabagi. Apart from that they helped me with their critical insights.